Kerrie Noor is an Australian writer who lives in Scotland  and teaches belly dancing. She’s written a series based on that and has recently branched out into science fiction. She agreed to let me quiz her about her books, her writing style, and her process.

You write in diverse genres. Do you think about genre before you start writing? Do you write for different audiences?

Comedy is always the background; for me it seems to be part of my bones. A story starts with a funny scene or dialogue usually from a real-life situation or a cheesy film.  There is a reader I have in my head who I write for, she or he is usually listening with a drink at the bar laughing in the right places. I imagine myself telling him or her the story.

What kind of writer are you? Do you insist on daily word counts? Do you write in silence or with music? In the morning or at night?

I write best in the morning. I often go to bed early, wake at five and that’s when the words flow and the problems melt away. I don’t do a daily word count except at the very beginning when I will try to write 1,000-1,500 words a day. I wake up and just write scenes and dialogue until 1,000-1,500 is done once. When I am at 30,000-40,000 words I stop and try to make sense of it all. I can write anywhere. Sometimes, I like to play meditation new age type music (from Youtube) while writing.

What do you do when you get stuck in the writing process?

Sleep on it, do something else, usually clean, walk, write a blog, cry, drink, keep going (don’t really cry). I am used to getting stuck. But the best thing is to wake up early and write, it really is so easy to write first thing. Right now, I am at the end of a novel and I am quite stuck so I have printed it out and will read through it all. Actually, when I think about it, the ending is always the hardest for me. I think the ending I am working on just now is quite a painful piece, which is weird as it is a comedy book.

Can you describe your path to publication? Did you query agents? How long did it take?

I had two agents when I started but nothing came of either. So I gave up and self-published my first book which sat on Smashwords and Amazon. I then spent time trying to promote by becoming a story teller/ stand-up comedian, and did a small show in the Edinburgh festival. None of which helped in any way, but was a lot of fun and I still have exaggerated stories in my head to write. It was only when I started Nick Stevenson’s course I began to understand digital marketing.

Talk a bit about your belly dancing books. How much is based on your life? Will there be more to the series?

More is based on my life than I first realised. I started to teach belly dancing at the end of a bad marriage. I was quite depressed and lonely at the time and terrified of leaving him and being even more lonely. I was also quite chubby and felt bad about my body, etc. Belly dancing changed my life. I was so passionate about it and I wanted other women to feel as I did. Sheryl’s Last Stand came from all those feelings.

The Downfall of a Belly Dancer, is more about living in a small place and how we as women relate to each other, and the loss of an ego.  I found when I first discovered belly dancing I became quite full of myself, my ego at times took some knocking and I wanted to write about that and used Nefertiti to express it, I hope with humour.

I have almost finished the third book in the series, Four Takeaways and a Funeral. Nefertiti narrates the story which is all about her pal Mavis. The story is about friendship, sibling rivalry, with a hint of curry…

I have plans for a fourth all about Sheryl again, she wants to become mum.

I have also just published the first in a Sci-Fi comedy series called Rebel Without a Clue. Lots of older women from another planet (Planet Hy Man) behaving badly.  It’s all about power, and what we will do to keep it.

And also, being the odd one out in a world you don’t understand even though you have learnt about it.

To learn more about Kerrie Noor, check out her website. The first book in the Belly dancer series is free on Amazon. 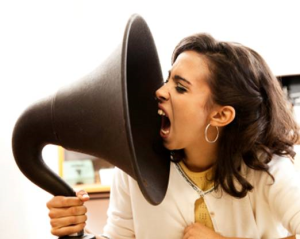 Don’t know about you, but I’ve had a voice ever since I was born. A piercing sound box that I used to alert the armed forces I was hungry or other uncomfortable physical situations. I continued with that wail until I learned to speak, first with a decidedly New Jersey slur, not too dissimilar from the Southern drawl I later adopted the year I lived in Alabama and attended kindergarten. Even later I picked up a bit of pidgin from Hawaii when my family lived there for a few years. Finally I settled on California’s western twang after moving here on my thirteenth birthday and making it my permanent home except for three crazy years early in our marriage when we lived in Detroit. (Don’t ask, just don’t.)

My writer’s voice came in about as slowly and with as many distractions along the way as my baby and childish ones. I learned to speak and anticipate because I learned first to listen and observe. I even fidgeted when writing my first book with present tense versus simple past tense. Though this is not exactly the same thing, it does affect the writers’ voice. Fortunately I recognized that present tense is an awkward attempt to sound edgy and urgent while simple past covers content and character more comfortably. My developed writer’s voice sounds like my alter ego, notable for the realization that this is a desirable state and I should be so lucky to maintain my voice throughout my novels. Every writer reveals her voice in her work though the subject may be unique, book to book. It’s the way she depicts characters, the style of her sentence structure, and her grasp of dialogue.

Not a very specific strategy for defining the single most personality driven quality of our writing, is it? Confused? Shouldn’t be, because voice is as recognizable and distinct as other identifiable traits. After all, I’d know Beyoncé’s music from Taylor Swift’s even if they’re belting songs I’ve never heard. I can tell the difference between Beethoven’s rousing classical symphonies and the contemporary vernacular of Aaron Copeland’s ballets. I can distinguish impromptu jazz from free style rap no matter which I prefer (not telling you here.) I can look at a landscape painting of bold, thick oil strokes and declare it’s by Van Gogh or at a delicate watercolor painting of an animal and know it’s by Albrecht Durer. Writing voice is not much different, though the characteristics of voice description are a bit more nebulous.  Maybe a bit harder to pinpoint, to fit into rigid templates, but still unique.

More important than being fluent at describing writing voice to comprehend the distinctions is being honest about presenting my voice in my writing. I learned early to drop the pretense of mimicking Shakespeare, whose luminous and melodic voice I can’t assume on the best of my days, or Barbara Kingsolver, whose deft mind creates stories that stick with me years after I’ve read her books but whose masterful style eludes me. Still, I have begun to write with my own voice, a skill confirmed by readers in my critique group. It comes most vividly when I allow it to come most naturally, letting the material dictate my story and the way I present characters and plot.

Aspects of my writing style come to me from my crazy quilt background, not just the way I heard and adopted dialect when I was a kid, but the way I noted how people lived in different parts of the country, how they interacted with each other and conducted their lives. It came from the sights that lured me to explore the outdoors, from the smells that tempted me into the kitchen, from the various cultures across the country, and from my joy or distress over those experiences. I discovered that reading my WIP aloud gave me a sense of what was powerful: short sentences, driving hammer-like against steel nails. Or what was poetic: comparisons between unlikely subjects, forcing them to dance duets. Or what was insightful: drawing conclusions from mystery.

My voice is subjective, wet clay of my thoughts molded by my imagination. I hope my readers will love my voice. I’ll settle for them liking it, but I have to remain true to who I am or my story falls apart like broken pottery. My rhythm and syntax must engage my reader because let’s face it: as original as I try to be, as all writers try to be, there are only so many themes and plots out there. It’s the writer’s voice that seduces the reader. I mewled as an infant. Now I howl, I whisper, I recite, I shout, and I chant. Come read my work, come listen to the sound of my stories. Hear my voice.