I find most of my conscious dreaming occurs early in the morning, often an hour or two before the alarm clock is scheduled to ring.  More often than not I’m semi-conscious and fully aware I’m experiencing a dream.  That’s when the fun begins! 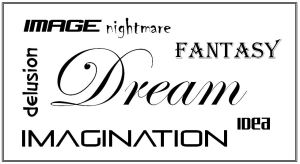 If I’m being attacked by creatures, I’ll simply levitate from danger or conjure a video-game style blast that propels from my palms toward the target.  Or, if it’s a more mundane dream, I’ll take crazy risks I would never do in real life, like offering marriage proposals to perfect strangers or asking my friends uncomfortable questions.  I find when I take charge of my dreams, the video-clip playing in my brain freezes for an instant–the characters stumble–and then begin to follow my in-line script edits.

Aside from ordinary scenario-based dreams, the past few months words and sentences have appeared more frequently in my dreams.  For example, I’ll be facing a sign or holding a note, and I’ll have the feeling of what it is I’m looking at.  But then I’ll make it a point to focus on the word arrangement, and that’s where things turn to gibberish.

Earlier in the week I dreamt I was reading a couple sentences written on a whiteboard at work.  My feeling told me it was work-related and completely logical.  It was a solution to work-related problem.  But then I’d focus my attention on the words and it would read something like this:

In my dreams I can’t read words as easily as I do in real life.  Instead, I’m forced to take a three-second pause between words to focus and comprehend.  Literally, the vision shows a word coming into focus, and often it’s not the word I expected.

Last night was different. I wrote a beautiful poem in my dreams – or so it seemed at the time.  Having realized I was mid-dream, I carefully started to read and re-read the poem to determine whether or not the arrangement of words made sense.  They did.  The shape of the poem was beautiful.  The meaning was beautiful.  No edits were required.

As expected, by the time I woke up this morning I couldn’t even remember the subject-matter or a keyword within the poem, which has me questioning whether the poem ever really existed to begin with!

I like writing about dreams.  Though I don’t keep a notebook by my bed, in the past I’ve had dreams so inspiring I’d actually climb out of bed and head to the computer to write down some key notes and feelings.  I find just the act of spending a few conscious minutes thinking about the dream was enough to cement the story idea in my head.

Have you experienced anything like this?  How often are you inspired to write about dreams?  Do you keep a notebook by your bed?  Have you ever used it?  Are you haunted by a past dream that you’ll eventually write?