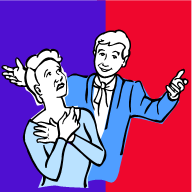 Charades is the game of finding the correct words to translate a silent pantomime. It’s a time filler when the party runs up the alcohol level and winds down the intelligence quotient. Writing is about finding the correct words to describe what’s going on in your book. Good writing sets the standard for intelligent expression and evokes authentic experience. We learn as young writers not to write, he was in despair, she was terrified, they felt horror run through their veins. What does any of that say? Is it the same despair you felt when you weren’t invited to the prom? Probably not if it’s the despair of a boy taken from his village to be turned into a soldier to fight an adult war. Is it the terror you experienced when your grades arrived in the mail and your parents got the envelope before you did? Not likely in comparison to the terror of a little girl snatched from her mother’s arms and pulled into a stranger’s van. Is it the horror you bore as your kid stuffed her dirty underwear down your toilet and flushed? Not quite like the horror of the child that stands at his mother’s bedside and sees the rise of her final breath, then wonders who will care for him.

Yet all we writers have is words. How I’d love the throb of a deep drum pounding out the steps of the boy as he is marched into the army. A volcano to erupt when the little girl is taken from her mother. A torrential downpour as the child stands beside his dead mother and doesn’t know where he’ll sleep that night. Those words – despair, terror, horror – have so many labyrinths of suggestion, depending on context. Context is everything. Writers must explain what we mean, how it really is.

Explain what you mean in too many disjointed words and your reader closes your book. “It was a jungle so dark that the leaves overhead blocked all the light, the way that a canvas tarp blocks out the sky when you go camping, but this was much more terrifying because they weren’t camping, they’d forgotten their compass and they were lost.” Your reader didn’t get that far – yawning with disorientation, he quit reading a description of a jungle the writer had never experienced.

This is the jungle of the 1959 Belgian Congo in the hands of Barbara Kingsolver from The Poisonwood Bible:

Vines strangling their own kin in the everlasting wrestle for sunlight. The breathing of monkeys. A glide of snake belly on branch. A single-file army of ants biting a mammoth tree into uniform grains and hauling it down to the dark for their ravenous queen. And, in reply, a choir of seedlings arching their necks out of rotted tree stumps, sucking life out of death. This forest eats itself and lives forever.

Here is the Nigerian jungle from Little Bee by Chris Cleave when Little Bee walks into it with her big sister, Nkiruka:

When we reached the jungle it was silent and dark…We walked for a long time, and the path got narrower, and the leaves and the branches closed in on us tighter and tighter until we had to walk one behind the other. The branches began closing in on the path so that we had to crouch down. Soon we could not carry on at all…We carried on for a little way, weaving around the plants, but very soon we realized we had missed the path and we were lost.

In this excerpt, Ann Patchett describes Marina Singh’s first view of the Amazon jungle from State of Wonder:

At dusk the insects came down in a storm, the hard-shelled and soft-sided, the biting and stinging, the chirping and buzzing and droning, every last one unfolded its paper wings and flew with unimaginable velocity into the eyes and mouths and noses of the only three humans they could find. Easter slipped back inside his shirt while Dr. Swenson and Marina wrapped their heads like Bedouins in a storm.

Three views of the jungle with very different depictions, each authenticated by distinctive detail. We didn’t have to read the books with the dictionary on our other arm; the words are basic. Master writers use words precisely and we get the image. Novice writers must learn to apply that kind of expertise and insight to their stories.

How to choose, what to choose, what words will do the job best? It might be the smallest words, those that let us see details that reveal the truth because other words are rife with ambivalence or too many definitions. When describing the process of marquetry in The Inlaid Table, I couldn’t write, “A complex machine forms an intricate shape.” I want the reader to look through the pin holes pierced by a thin needle so they can see the precision of placement for tiny shards of wood to create a sunburst pattern. It’s the same information but one take is broad and general, the other, specific and detailed. The first example hints at the finished product; the second lets the reader see the breadth and skill of the task. And all just a few carefully chosen words.

A book is as much charade as the party game. The audience/ reader tries to figure it out by watching/reading the clues. The master paints a more vigorous picture – that’s the level I aim for.