Like many of you, in various English classes through Junior and Senior High I had to keep a journal. For the first 5 minutes of class we each pulled out a cheap spiral notebook and wrote about…whatever. I’m sure the intent, when the assignment was first conceived, was a bit more focused than it was by the time I made my way into the classes. If the intent was to have us write about anything profound, or to make progress toward some useful writing, it was lost on me–especially the years where English was the first or second class of the day.

No, my journals were often filled with musings (feel free to read that as whining) about how difficult it was to come up with something to write about in 5 minutes. My forced creativity occasionally led to my journal being filled with disconnected sentences, and wishes that I had enough time to focus on a fun topic. Nearly every time a teacher graded these I got unfocused comments that were about as close to a teacher calling a student a smartass as they could get away with.

As I’ve gotten older, and continued writing for another 30 years, the process of coming up with something to write about hasn’t gotten any easier. I guess I’ve just always had a problem with unfocused inspiration. Give me a pen and a blank page and my mind starts ticking through possibilities–but instead of whittling them down to a select few, the topics multiply and multiply again until my writing paralysis starts to look like fear, rather than overload.

I didn’t understand this all back then. In fact it took me a long time before I saw the pattern–as soon as a teacher told me what to write, I was off on a tear. Whether they gave me a narrow focus (an essay on a narrow topic) or a broad suggestion (write about aliens), the paralysis was over.

This still holds true for me. When I need to write a story I feel so overwhelmed with all the potential stories I could write that I have trouble settling on one in time to get something on paper. But when someone says, “Write a story using one of these characters as your protagonist,” or “use this song as inspiration for your sci-fi story,” I can pick few key points and I’m off.

Now, a little not-so-secret about me is that I like games. I spent years playing tabletop role-playing games, and even now my friends and I play quite a few party and strategy games. So, make something a game–and more importantly, tie in a set of custom dice–and you’ve got my attention. 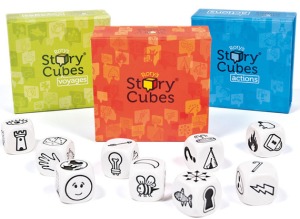 So when I came across these boxes in my local game store it wasn’t a difficult decision to fork over $7 to try it out.

The concept here is not difficult. There are nine 6-sided dice, each side with a simple picture. You roll the dice and try to incorporate the nine pictures into something coherent. That’s if you play by the rules. But anyone who’s ever played Dungeons & Dragons–or even Risk–knows that everyone makes up their own rules.

To me nine pictures seems fine for a game, but I’m not trying to see if I can link all the images; I’m just using them as a kickstart. So now, when the blank page has been mocking me for a few minutes I don’t hesitate to whip out my special dicebag, pick 2 – 5 dice at random, and see what comes up.

This little writing tool is no cure-all. It doesn’t help me schedule time to write, it doesn’t help when my subconscious or ego gets in the way. But, when I’m ready to write, and can’t come up with anything, it’s amazingly useful.

Currently there are 3 sets of Rory’s Story Cubes: the Original (red box), Actions (blue box) and Voyages (green box). The MSRP for each is $9.95 although my local gaming store has them for $6.95 each.There are also Story Cubes apps for both Apple and Android platforms. As of today, the app costs $1.99 – $2.25, which comes with the main pack, and you can download the Actions pack for free. The Voyages pack costs another $1.99 – $2.25). The apps seems a little overdeveloped for what they are, but not so much that they become unusable. The only limitation is that no matter how few, or how many dice sets you have downloaded, the app always rolls nine dice, no more, no less.